It’s been a long time now since I first published Talos to the Google Play Store, and even longer since I first decided that I was going to make it over 18 months ago. Yay for being slow and not spending as much time as I probably should developing it. As such, I think an update is due.

On release, I wasn’t quite happy with how Talos looked. The cards layout never looked quite right to me. Sure, it looked better than the first iterations where it was 4 icons, not even with an icon, and arguably better than my ‘modern UI’ inspired design. Something just always felt a little clunky. I think the clock being down in the middle broke things up a bit too much. 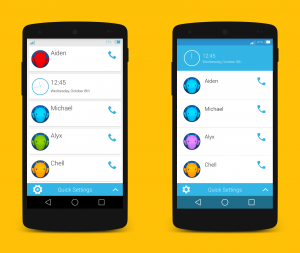 Well, that’s changed a little. I’ve abandoned the card backgrounds in favour of a simpler tile style, and moved the clock around. It’s worth noting that just like the current version the clock disappears on lower resolution devices so that the contacts still show on the main screen without scrolling, as I am still trying to avoid scrolling as it is not as clear for little ones.

I’ve also changed the quick settings, but I am not so sure my changes are for good here. It looks a little tidier, but they may be too small. The clock will appear here only on lower resolution devices and display in a similar way as it would have on the main screen. 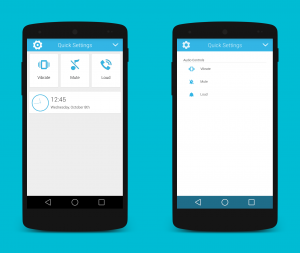 I may yet turn these back into larger icons, as the extra white space has a, rather buggy, extra use. As you can see below, it still has part of the card layout, and the text isn’t aligned properly. The back-end for this is also quite hideous and doesn’t function how I want it to, so it may not be included in the next release. It’s also painfully inefficient when it loads. 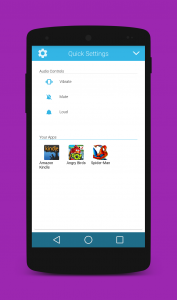 The settings themselves have also seen a bit of a re work. I’ve completely re written the back end of them to be more in keeping with newer releases. You now get an action bar (even on older devices) so that navigation back to the main app is a little easier. 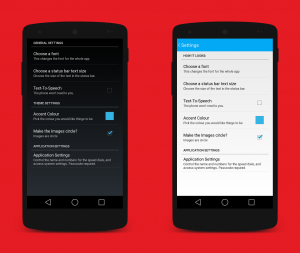 The wording still needs to be improved, but you get the general idea of what is going on. I’ve toyed with the action bar changing colour when you change your preference, but I’m undecided if that will stay in, as it is largely pointless. 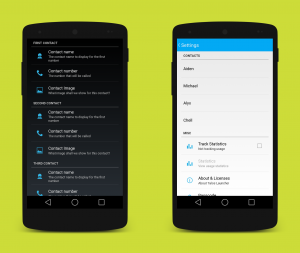 The main settings have also been restructured a little. There is now less scrolling as each contact has been moved into a separate screen, and some options have been fine tweaked a little. These may change a little yet.

Other changes include tracking usage. These are incredibly crude and only so far as to say how many times a contact has been called, and in a later release, messaged, since the settings were last reset. None of this data is transferred to me, and is stored locally on the phone. There are no internet permissions after all.

Hopefully this update will be released sometime towards the end of October/mid November. It depends how much I am consumed by Destiny I suppose…

Oh, the icon is now blue rather than off gold, just because.